Apple Going Down in PC Market Too as MacBooks Lose Ground

After losing ground in the smartphone market due to the slower demand for the iPhone, Apple is now declining in the PC market as well, with MacBook sales dropping no less than 3.8% in Q4 2018.

Data provided by Gartner for the quarter indicates that worldwide PC shipments went down 4.3% to 68.6 million units. 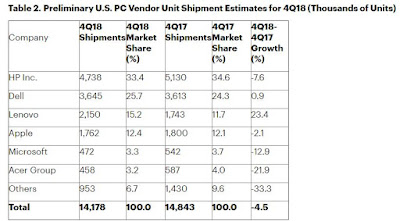 New MacBook not making any difference

Gartner says that most of the manufacturers experienced a decline caused by a shortage of CPUs. The demand existed, the market research firm says, only that the said shortage “affected vendors’ ability to fulfill demand created by business PC upgrades.”
It’s now expected that most companies would recover in 2019 once the shortage of processors is resolved, though it remains to be seen to what degree each company benefits from the demand for upgrades.
Gartner explains that the growth the PC market experienced in 2018 was mostly the result of Windows 10 upgrades, which convinced more customers to purchase new hardware.
“The majority of the PC shipment decline in 2018 was due to weak consumer PC shipments. Consumer shipments accounted for approximately 40 percent of PC shipments in 2018 compared with representing 49 percent of shipments in 2014,” Mikako Kitagawa, senior principal analyst at Gartner, said.

“The market stabilization in 2018 was attributed to consistent business PC growth, driven by Windows 10 upgrade.”
Apple’s decline, however, comes at a time when the company introduced new models in November, so it’s surprising that not even refreshed products manage to increase sales.