“Wanzhou Meng was arrested in Vancouver on December 1. She is sought for extradition by the United States, and a bail hearing has been set for Friday,” Justice Department spokesman Ian McLeod told The Globe and Mail. “As there is a publication ban in effect, we cannot provide any further detail at this time. The ban was sought by Ms. Meng.” 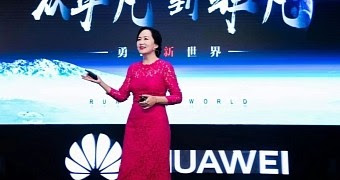 Meng, the daughter of Huawei’s founder Ren Zhengfei and deputy chair of Huawei’s board, was apprehended following requests received from American law enforcement authorities.
As detailed by The Globe and Mail, “A Canadian source with knowledge of the arrest said the U.S. is alleging Ms. Meng tried to evade the American embargo against Iran but provided no further details.”
The Wall Street Journal previously reported Huawei’s alleged violations of the sanctions imposed by the U.S. against Iran during April 2018 based on sources close to the investigation, a report denied by a Huawei spokesperson who said that “no government has ever asked it to spy on or sabotage another country.”

Regarding Meng’s arrest, Huawei said that “The company has been provided with very little information regarding the charges and is not aware of any wrongdoing by Ms. Meng. The company believes the Canadian and U.S. legal systems will ultimately reach a just conclusion.”
The Chinese company also added that it “complies with all applicable laws and regulations where it operates, including applicable export control and sanction laws.”
Furthermore, the Chinese embassy in Ottawa also protested Meng’s arrest demanding her immediate release given that Huawei’s CFO did not violate American or Canadian laws.
The embassy also added in its official protest statement that Meng’s human rights were also seriously harmed and committed to taking all the necessary measures to protect the interests and rights of Chinese citizens.
“Huawei has direct ties to the Chinese government and Communist Party, has long posed a serious risk to US national security, and I continue to strongly urge Canada to reconsider Huawei’s inclusion in any aspect of its 5G development, introduction, and maintenance,” told Republican Senator Marco Rubio, a member of the U.S. Senate Intelligence Committee to The Globe.
U.S. started an all-out campaign trying to persuade its allies to also give up on acquiring telecom equipment from Huawei Technologies Co amid worries regarding potential worries of Chinese meddling in 5G networking tech at the end of November 2018.
Post Views: 387
Share