Despite being around for more than a year already, the notch continues to be a rather controversial design feature, and it remains a love-it-or-hate-it kind of thing.

While the notch has been the subject of quite a lot of controversies, Apple itself doesn’t want to give up on it, so the 2018 iPhone generation expands it to the entire iPhone lineup. 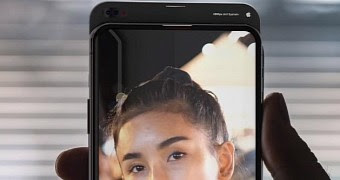 Needless to say, there are ways to hide the notch, and as it usually happens, users across the world propose more or less doable ways to do it.
This concept created by Antonio De Rosa does exactly that, imagining a completely new approach for the iPhone that allows the smartphone to stick with a no-notch design, but instead go for a bolder move.

The idea proposed here uses a sliding camera that comes out from the top of the iPhone, an implementation that’s not entirely new, but which could make sense on the iPhone. However, the sliding out camera is paired with other upgraded parts, including a quad-lens unit on the back that can even take 3D photos.

Read More – iPhone 11 Could Feature Wi-Fi 6 Support
Touch ID is also there in a place that Apple should really have in mind if it ever plans to bring back the fingerprint sensor. It is hiding under the Apple logo, making the authentication quite a breeze.
Certainly, there still are things to improve about this concept, and as it typically happens, not all ideas that come from the user community are easy to bring to mass production. Apple, however, would really do itself a favor if it decides to pay more attention to feedback, as the company’s current approach has caused quite a lot of criticism, mostly because it ignored the majority of the suggestions submitted by customers.
The next-generation iPhone is projected to launch in September, and unfortunately, there’s a good chance the notch will still be there.