Samsung’s Galaxy S10 is the next big launch in the smartphone world, and naturally, there are all kinds of photos making the rounds every now and then.
Contents hide
1 Leak Claims the Samsung Galaxy S10 Display Hole Could Be Tiny
2 Smaller bezels all around

But if a recent leak is anything to go by, there’s a good chance that Samsung is close to launching a design that looks surprisingly good, all thanks to a much smaller hole in the screen. At least, smaller than we originally anticipated. 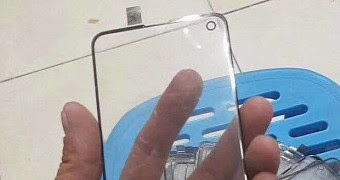 A protective film that was posted online by reliable leakster Ice Universe shows that the Galaxy S10 may come with a hole in the screen in the top right corner, and by the looks of things, this hole is a lot smaller than the one on the Galaxy A8s.
While I can’t say that the Galaxy A8s design is ugly, a smaller hole in the screen is clearly a better choice, and it increases the available screen estate without eating up too much from the corner.

However, it’s worth noting that this protective film seems to indicate that Samsung is preparing a single front-facing camera for the device.

Smaller bezels all around

The cited source claims this may be the Galaxy S10 with a 6.1-inch display and a 19:9 screen ratio, and that this configuration makes the phone pretty easy to use with just one hand. Again, this is just a good thing given the size of the screen.
The protective film also confirms that Samsung is trying to make the bezels as small as possible, and they have been substantially reduced on all sides. Without a notch, this looks pretty good, so the screen estate would be significantly improved.
The Galaxy S10 is projected to see daylight in February, just ahead of the MWC mobile conference, and then go on sale in early March. More details will probably make the headlines in the coming weeks as we approach the launch date.
Post Views: 257
Share