Just when you thought the controversial notch couldn’t get uglier, here’s Samsung taking everyone by surprise with a design that nobody could see coming.

The device you see here is Samsung’s very own 5G demo phone which was presented at the Snapdragon Summit in Hawaii and supposed to show how the South Korean firm wants to bring 5G to its devices. 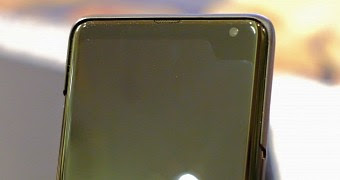 The smartphone features a notch, but not exactly where you expected it to be, but in the top right corner. By the looks of things, the notch is the home of the front-facing camera, while the speaker is placed right on the edge at the top of the phone.

While this is a horrible approach, there are several things that need to be mentioned here.

First of all, it’s important not to forget that this is just a prototype. While Samsung is expected to bring 5G to the Galaxy S10 lineup launching next year, it’s unlikely the company would tease the design of the phone so early.
The Galaxy S10 is a key product launch for Samsung, as it marks the 10th anniversary of the phone, and at the same time, it’s also the company’s new iPhone XS rival. So everything has to be right, which means that an early teaser doesn’t make any sense.
Then, bezels are indeed expected on the 5G model because the device has to boast more antennas for a stronger signal. If Samsung wants to embrace the notch still remains to be seen, but on the other hand, it may be the only way to go given the company’s struggle to increase the available screen estate.
However, while Samsung has promised not to offer a notch on its phones, this can’t technically be called a notch, right? So the South Korean firm isn’t breaking on its own promise, though I’m pretty sure that should this design get the green light, it may actually do more harm than good.
Nevertheless, we’ll see what the Galaxy S10 with 5G support would look like in early 2019 when Samsung is projected to officially roll out the new series.
Share