Telegram 5 for Android Now Available with New Design and Features

Telegram continues to be one of the most advanced alternatives to WhatsApp, and the updates that the team behind it roll out every once in a while make it an even more compelling product for those on Android and iOS.

Telegram 5 for Android Now Available with New Design and Features

The update to version 5 was released today on Android, and it comes with a plethora of improvements, including refinements given to the Translations Platform. 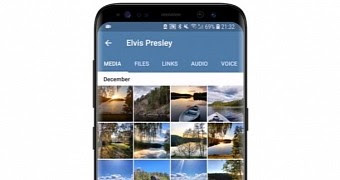 With this tool, users can translate Telegram into their own language, create custom language packs, and even share them with others. And beginning today, users can also discuss about new languages in their own dedicated public groups.

Instant View is also being updated to version 2.0, allowing users to view web pages shared within conversations without leaving Telegram and, as the developing team says, with zero loading time.

“Today we’re expanding the platform with support for right-to-left languages, blocks of related articles, image links, tables, nested lists, horizontal scrolling, collapsible text blocks and much more,” the announcement reads.
In terms of design updates, the new version of Telegram now allows you to view shared media from the profiles of users, groups, and channels, while also benefitting from a new interface that’s focused on better thumbnails for previews and increased loading time.
The Settings screen has also received a facelift, and Android users get a bunch of new options from the iOS app, including detailed settings for the badge counter. Furthermore, Telegram 5 introduces a new photo selector to make it easier for you to set up a new profile picture, as you are allowed to better crop the region in an image that you want to use.
You can download the new Telegram app for Android from Softpedia using this link and try out all these improvements in version 5.
Share